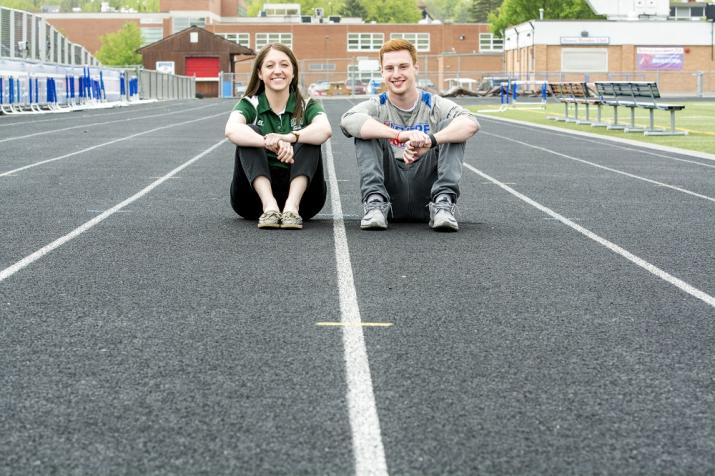 When she heard a student had collapsed on the athletic field, Taylor Gray, a 2015 CHSP athletic training graduate in the first year of her first job, immediately grabbed two things: her cell phone and an automated external defibrillator (AED).

Gray, employed through Summa Health in Akron, Ohio, was part of the school's team of athletic trainers and coaches who responded when seventeen-year-old Caleb Perkins collapsed on the Revere High School practice field the afternoon of March 18, 2016. Gray and another Revere athletic trainer administered a shock to Perkins’ heart with the AED when CPR and artificial respiration failed to revive Perkins.

Perkins was taken to Akron Children’s Hospital where he was immediately taken by ambulance to Cleveland Clinic.

“At that point, the doctors were telling me that he might need a heart transplant,” said Lara, Caleb Perkins’s mother. “I was in shock. Caleb was an athlete; he’d never even been in a hospital!”

After seeing Caleb off in the ambulance, Gray went back to work in the field house—but soon realized the experience had totally drained her.

“It was like all of the adrenaline that allowed me to be calm and level-headed while doing my job suddenly evaporated,” Gray said. “I was also thinking ‘Gee, most athletic trainers go through their entire career without having to face a cardiac arrest. Lucky me.’ But I was so grateful that my training just kicked in.”

Taylor’s automatic response came, she explained, from hours of trial runs and mock emergencies staged in her undergraduate program. She also credits working with Jeff Russell, Ph.D., at Ohio University’s Science and Health in Artistic Performance (SHAPe) Clinic, one of the few clinics in the nation that serves performing artists. According to Gray, working as a graduate assistant athletic trainer at the clinic “allowed me a wide range of experience and training on how to best approach and handle any medical situation.”

Click here to read the rest of this story, featured in Connect magazine (see page 6).