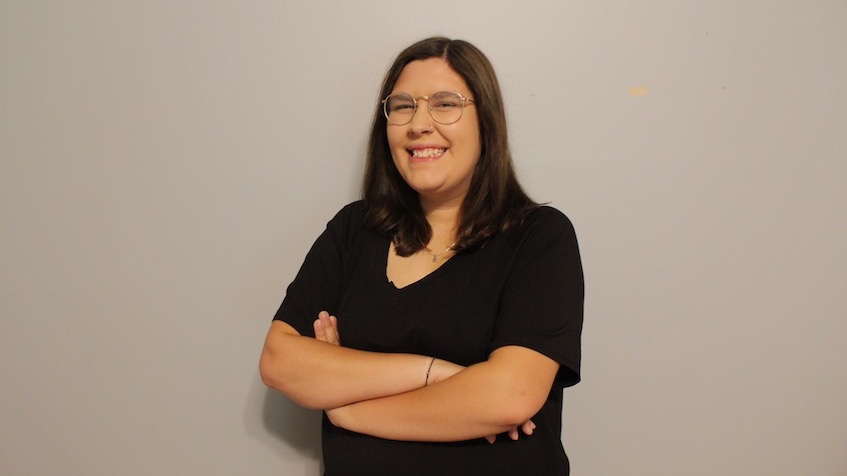 Delia “DeeDee” Grantham took a deep breath and tried to calm her nerves as she paced in front of her laptop computer. She had rehearsed what she wanted to say over and over and was anxious to hear from Top Hat — a learning platform for higher education offering thousands of dollars in scholarships.

The screen suddenly came to life with the image of Top Hat co-founder and CEO Mike Silagadze.

“Congratulations on being part of the final round for the Top Hat scholarship,” he said. “We just want to ask a couple more questions about your application.”

Grantham, a sophomore majoring in social work in Ohio University’s College of Health Sciences and Professions, shared her story about growing up being visited by social workers as her family life crumbled. She spoke about being removed from her biological parents’ lives and how she wanted to make a difference as a social worker herself.

“It’s inspiring to hear that even with all the challenges you’re having to face,” Silagadze said. “But we have to be honest with you. We’ve not been totally truthful with you and unfortunately, you’re not a finalist for the Top Hat scholarship… You’re actually the winner! You’ve won $50,000.”

An overwhelmed Grantham felt her jaw drop and her heart stop for a moment as tears of joy ran down her cheeks.

Grantham grew up in Bexley, Ohio, a suburb of Columbus. One of four siblings, Grantham was the only member of her family to graduate high school. At the age of 15, she and her siblings were removed from her parents’ custody after a “toxic and abusive home life.”

Grantham started working with a social worker who helped her transition to the custody of her best friend’s family, the Burrises. Grantham’s social worker, LaVita, was one of the few stable influences in her life.

“LaVita was the kindest person I had ever met. She stuck with me and fought through hard times with me the entire way,” Grantham said. “It was a support I had never felt before. She genuinely changed my life and it made me realize I wanted to do the same for others.”

Visiting Athens was all it took for Grantham to know Ohio University was where she wanted to study social work. During her freshman year, she applied for the Top Hat scholarship program.

Her story and positive attitude earned her a spot as a finalist and, with the dramatic announcement from Silagadze, she earned the $50,000 scholarship which she said will cover most of her education. Grantham plans to attend graduate school upon completion of her bachelor’s degree.

“It was a life-changing moment for me,” Grantham said.

Grantham told the Burrises the good news. The woman she now calls mom sobbed with her and hugged her, telling her that nobody deserved the scholarship more than Grantham. Her father gave her the “world’s biggest high-five,” hugged her and reminded her that it wasn’t what they did for her but what she did for herself that allowed her to be in this position.

“I had so many opportunities to give up with everything that happened. But I wouldn’t let it happen,” Grantham said.

“Social work is the thing I want to do for the rest of my life,” she added. “To think that it is actually in my grasp because someone, somewhere found me worthy of such a large gift is a dream.”