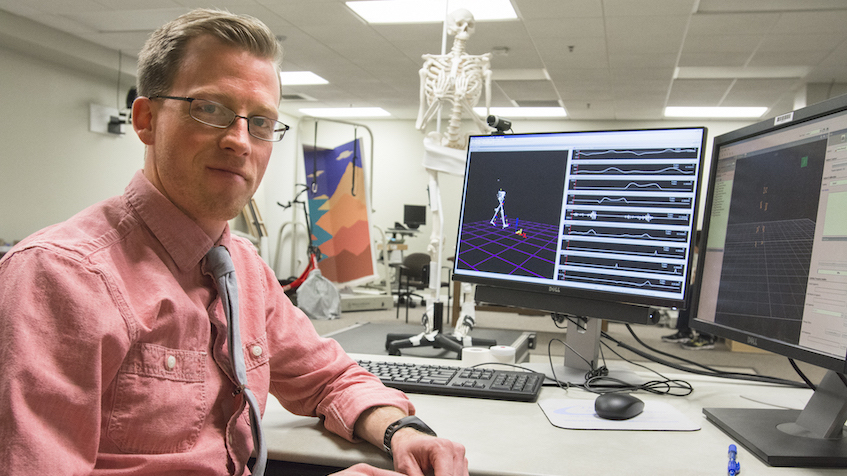 Prior to joining Ohio University’s College of Health Sciences and Professions (CHSP) as an assistant clinical professor in 2014, Wayner attended OHIO as an exercise physiology undergraduate from 2001-2005 while also participating in the University’s Track and Cross Country teams. A fifth year of eligibility allowed him to run more, and he also took the opportunity to begin studying physical therapy.

After earning his doctorate in 2008, Wayner traveled to the “running capital of the United States,” Eugene, Oregon, for seven years of clinical practice; he also began researching injuries to runners during this period.

In 2014, Wayner returned to Ohio University after the opportunity to lead OHIO’s Gait Lab/Center for Running Performance, while also teaching and furthering his research, became available.

In 2017, Wayner developed the OHIO Women’s Cross Country Performance Program — a program designed to provide athletes with a multi-disciplinary team of professional and consultative services with the goal of enhancing training, decreasing injury frequency and severity and maximizing potential. Since then, the men’s team has joined the program and now 40 athletes are supported. Wayner said that participating athletes have been encouraged to report any changes in their running performance, which has resulted in an increase in the number of injury incidents; however, he also noted that the time lost due to injury has been reduced by 40 percent. No, less than 20 percent of the injuries suffered by the runners has resulted in time lost on the field.

“Running in the No. 2 physical activity next to walking, and it’s the No. 1 participated sport with track and cross country in the U.S. A lot of people are doing it and want to do it. However, running also has a big problem,” said Wayner. “Around 42 percent of runners get injured annually. We want to help people reach their performance goals. To do that, they have to be healthy. The No. 1 reason why people stop running is because they get hurt, and when they do, they might stop exercising altogether. We’re trying to help them with the best experience they can have.”

Running even helped Wayner find love. As an undergraduate, he met his wife Ali as both ran for the Bobcats. Ali Wayner is now a coach for OHIO’s women’s cross country team and women’s track and field distance team. The two now team up to run around after their children, Zoe, 9, and Owen, 6.

While Robert Wayner loves to live his life “on the run,” there are times when he’ll slow down enough to hone his passion for playing the guitar. Although Wayner noted that his interest in the musical instrument has been an on-again, off-again experience in recent years, he said he’s found some consistency in his strumming, and his goal is to learn to play Van Morrison-style blues.