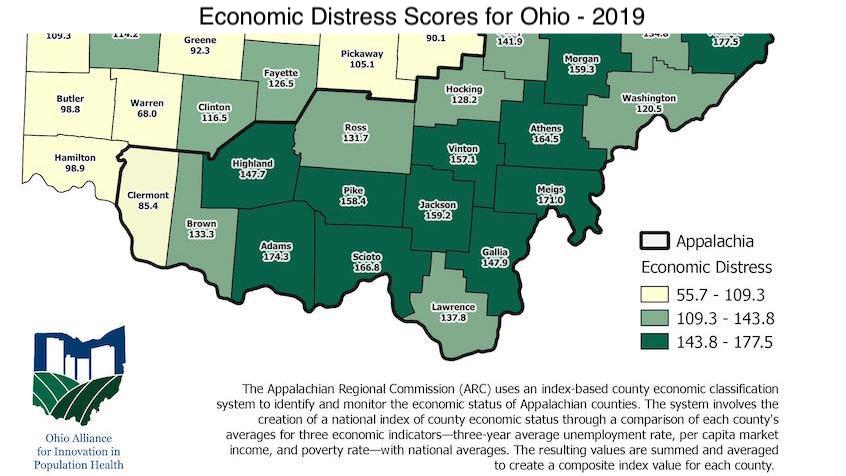 If the Appalachian counties of Ohio were combined into a separate state, it would be the second-most economically distressed state in the country. However, that fact doesn’t tell the whole story. Over the past decade, the state’s Appalachian counties have experienced more economic improvement on a per capita basis than the rest of the state based on a recent study.

Orman Hall, an executive in residence for Ohio University’s College of Health Sciences and Professions and the Ohio Alliance for Innovation in Population Health (Alliance), examined data compiled by the Appalachian Regional Commission (ARC) for 2009 and 2019. Economic distress, as measured by ARC, is determined by unemployment rate, per capita market income and poverty rate averaged over three years and compared to national averages. (The study also produced a related article focusing on national economic scores.)

“This study demonstrates that Appalachian Ohio is making progress. People in Appalachia are trying to solve their own problems but they need a renewed focus from state policymakers to solve the endemic problems of poverty confronting our region,” said Rick Hodges, director of the Alliance.

“With important leadership changes in state government, we want to make sure everyone understands that regardless of the modest economic improvements that have occurred, Appalachia remains the most distressed region of our state and policy attention is required to deal with the serious economic conditions that exist in the area,” Hall said. “While West Virginia ranks as one of the poorest states in the Union, in aggregate, its economy is better than the Appalachian portion of Ohio. The difference between Appalachian Ohio and the remainder of the state is shocking.”

Tom Johnson is the mayor of Somerset in Perry County (ranked 76th in the state in both 2009 and 2019) and is an executive in residence at Ohio University. Johnson said significant disparities in terms of educational attainment, poverty, health and economic development exist in Appalachia and that fixing those disparities means understanding them. To that end, Perry County earned a multimillion-dollar state capital award for a learning center and technology hub to help alleviate education issues and assist in creating new ideas for the region.

Jason Hamman, Monroe County’s economic development representative, said the loss of an aluminum plant and job losses in the coal mining industry contributed to the county’s economic distress over the years. However, Hamman said that in 2013, shale gas became a boon for Southern and Eastern Ohio and offset some of the job loss in Monroe County. He added that pipeline construction and other large projects related to the energy industry has Monroe County trending in a positive direction.

Holmes County had the biggest improvement going from 49th healthiest economy in 2009 up to 14th in 2019. Holmes County and Clermont County are the only two Appalachian Ohio counties in the top 15 for economic performance in the state in 2019.

“We’ve had fairly significant growth in the manufacturing sector over that time span — around 26 percent,” said Mark Leininger, director of the Holmes County Economic Development Council. “We are also a net importer of employees. Each day, around 2,200 more people come in the county to work than go out of county to work elsewhere. That’s interesting given our location is not within any of the development plumes that surround larger urban areas.”

Leininger said many of the entrepreneurs in Holmes County are local, started small and expanded.

“That’s been a good model for us,” he said. “We have a large Amish community and you hear stories all the time about how two brothers started a business together in a chicken coop and fast forward 20 years and they have 150 employees and are shipping product all over the country. We have a lot of people who are self-reliant and independent.”

Leninger added that the county boasts a large hardwood furniture maker presence but notes that the area is not likely to attract outside business interests.

“We’re mostly grown from within. Construction plays a role in this area and, even though manufacturing is our biggest employment sector, tourism also plays a large part in our economic development,” he said.

“These results suggest that in 2009, Ohioans living in the Appalachian region were significantly more likely to experience economic distress than Ohioans living in non-Appalachian communities,” said Hall. “An analysis of 2019 distress scores demonstrates that Appalachian communities continue to struggle with significantly greater economic challenges than residents from other Ohio counties. While serious endemic poverty continues to prevail in Appalachia, economic conditions improved throughout the region relative to the remainder of the state.”