Students express inspiration theater has on life beyond festival 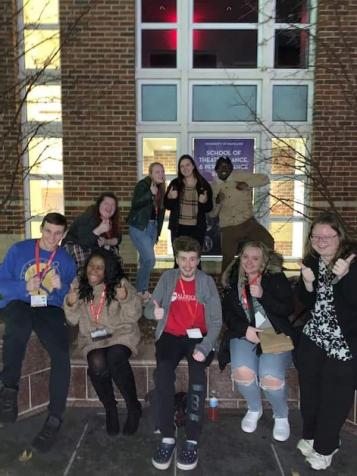 The KCACTF is a multitude of festivals spanning the United States – consisting of eight regions – involving thousands of students from colleges and universities annually, enriching the theater experience for students.

Each festival offers workshops covering all facets of theater such as acting, costume, lighting and sound design, dramaturgy, voice, dance, directing, etc. There is something available for anyone wanting to be involved with theater in some way. Not to mention, there are also multiple productions going on each day.

To compete, each student chose a partner and together prepared two scenes for presentation, a two-minute and three-minute scene and a monologue. After presenting their pieces during an audition, students received feedback from respondents which determines if they advance to the next of three rounds. Unfortunately, the Chillicothe campus students didn’t make it past the preliminary round this year. The winners of this portion of the program move on to compete at the national festival in Washington, D.C. for scholarship money.

Other students in attendance at the festival were Anthony Dixon, Marisa Newland, and Alanna Spriggs.

Dixon, a Communications major and first-time attendee of the festival, never thought he was much of a theater person, that is, until he took one of Dr. Lance Mekeel’s theater classes last year. Dixon remarked, “I feel more myself than I ever did playing basketball and I played basketball for over 15 years. I took Lance’s acting class because I thought it would be easy, but I never knew that it would be as fun and interesting.”

He continued, “Lance really made me feel comfortable with theater. Even though I had taken some of his classes and shown some interest, he never forced me to get involved. It just happened. He’s super supportive and is truly one of the nicest people I have ever met. It’s easy to want to be around that as much as you can.”

As a non-theater major, Dixon urges students to consider attending the KCACTF. “I really encourage people to take the opportunity to go. I think it’s a good way to step outside of your box. It forces you to be uncomfortable – even if you don’t do anything with theater, I still think you can learn things that will help with your career field or with life in general. The tools I learned can be used for whatever I want to do in my life, like networking with people of all facets of life.”

As a student attending for the second time, Newland commented, “Each time that I’ve went it has been a completely different experience – different workshops, different productions. You get to meet different kinds of people in a really supportive environment. You can’t go and feel bad about anything. Many of the people in the workshops are cheering you on, telling you to keep going and that you’ll get it. It really builds a community a people.”

She continued, “Everything about it is really cool. Everyone is there for a common purpose, to learn about theater, together. No matter how many times you go, you’ll always have an amazing experience.”

Newland, a Psychology/Theater major and theater enthusiast, would eventually like to pursue art therapy.

She remarked, “After transferring from OSU and getting involved again with theater, I knew that I needed it to be a part of my life again in a big way. The passion Lance has for theater really comes through in his teaching. You cannot take a theater class with him and look at it the same. He really shows how much of an expressive art it can be and that it is something that can really make an impact in the world.”

Spriggs, a Screenwriting and Production major also minoring in Theater, encourages students to consider becoming a part of the Theater Program. “If you’re looking to be involved in something, Lance creates such a welcoming environment that no matter how shy you are, you can get involved and feel at home – he really makes you feel welcome and safe.”

Newland also urges students to consider theater, “If you’re thinking about it, if you have any interest, my biggest advice is to just do it. If you just think about it, you’ll never know if it’s something you like – it could be something that changes your life. Regardless, it can become something big in your life and you can walk away with a new perspective – a new way of understanding things.”

This semester’s production, “Breaking the Circle: A Story of Struggle and Strength”, is based on a collection of monologues of those impacted by substance abuse, consisting of heartfelt experiences portrayed during a friend’s funeral. The show will begin Apr. 2nd and run through Apr. 5th in the Bennett Hall Auditorium with talk backs occurring after each production.

Anyone interested in getting involved with the OHIO Chillicothe Theater Program or for more information about the upcoming production, please contact Mekeel at mekeel@ohio.edu.