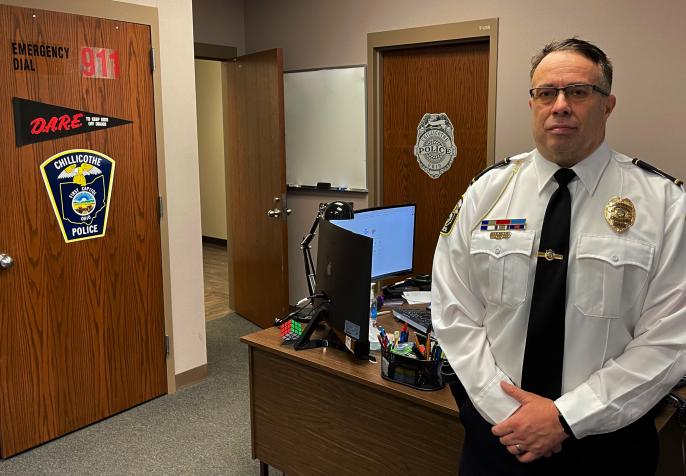 Chief Ron Meyers understands how perseverance leads to great rewards. We caught up with Meyers after being sworn in as the new leader of the Chillicothe Police Department. The path Meyers choose to get to his current position involved learning how to genuinely connect with the community at large and acquiring the tools needed to succeed in a criminal justice field.  It took Meyers 22 years to complete an Associate’s degree program, so he immediately pursued his Bachelors shortly after from OHIO Chillicothe.  A 2017 Criminal Justice alum, Meyers credits Ohio University for helping him succeed in a law enforcement career.  “A college education gives you a breadth of knowledge. You have to take a variety of classes offering different perspectives…I thought it was necessary to get a college education.”

Meyers views law enforcement as a calling. “It shouldn’t be just a paycheck or the benefits attached. It’s being involved in the neighborhood. Those neighborhoods that you are assigned to…It is not about arresting the bad guys, but rather helping people out…(you are) a part of the life cycle. And, you are immersed in those communities. And, you become a part of them.” Being a part of the local community is a vital part of Meyers new role. “I love Chillicothe and it has grown over the years and it has only continued to get better.” Meyers concludes, “We are a part of the community. We work here, eat here, play here, live here and it is important for us to engage in the community and be there with them.”

When he was young, Meyers looked up to his grandfather who was a Sheriff Deputy in the 1970s. His natural inclination was to give back to the community in which he lived after returning from military service. “…there was no real knowledge in my family about going to school and studying law enforcement. I understood interacting with the community, but I was lacking in the actual laws and procedures.”, says Meyers, “So, I thought it was necessary to get a college education and since I was residing back in Chillicothe, Ohio University was an excellent fit.”

Dr. James McKean, Associate Professor and RHE Law Enforcement Technology Program Coordinator, understands the type of passion and calling that comes with 21st century policing. Most coursework offered at Ohio University Chillicothe is taught by former or current law enforcement officers because they have an applied perspective, according to Dr. McKean. “The primary programmatic goal is to prepare students for positions in 21st century criminal justice organizations through the incorporation of critical thinking and problem-solving skills focused on advancing public trust and procedural justice.”

Chief Meyers believes that 21 century law enforcement is about understanding people and being there to meet their needs. “The community looks at the police in general as problem solvers…At the end of the day, when there is nobody else to call, we come and we help. We train the best we can to get those people assistance in their time of need,” says Meyers. Being in an occupation that is highly publicized and currently being scrutinized can be challenging. Chief Meyers is equipping his officers to look beyond the negative policing stereotypes with the type of honesty and transparency the community expects. “With law enforcement, there is no place for bias. Those who are in law enforcement currently, need to look deep inside themselves. Most bias can be changed through education and immersion into other cultures and environments. But, there are some that are deep rooted and you simply can’t change some biases,” says Meyers, “We don’t want those people who can’t get aways from biases. That is something law enforcement really needs to start focusing on. How can we change ourselves?”

Dr. McKean believes a bright future awaits today’s LET graduates. “In terms of U.S. labor statistics, the field is expecting a 5% growth in the next ten years,” says McKean, Now is an excellent time for interested students to pursue their aspirations for a career in criminal justice. Other notable alumni of the LET Program include the former Superintendent of the Ohio State Highway Patrol, agents with the U.S. Marshals service as well as court investigators, drug counselors or officers representing a diverse number of state or local agencies.”