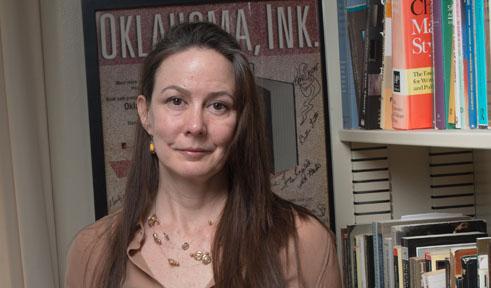 Dr. Thompson has a long-time interest in the study of American literature across a broad chronological range with special interest in late 18th- and 19th-century American literature. She grew up in Pawhuska, Okla., the headquarters for the Osage tribe and the home of Osage writer John Joseph Matthews, on whom she wrote her master’s thesis at the University of Chicago. Her interest in representations of indigenous women in letters, diaries, conversion narratives, and fiction began during her Ph.D. program when she worked extensively with the archives of the Presbyterian School for Indian Girls (founded in 1882), which later became the University of Tulsa. She received her Ph.D. in English Language and Literature at the University of Tulsa in 2008, and she continues to teach and write about the intersecting concerns of gender and race. She employs a range of methodologies, including textual analysis, historical, cultural studies, and psychoanalytic and post-psychoanalytic critical frameworks, and she is especially interested in combining historical, cultural and textual approaches to the study of national identity and the dynamics and ideologies of conquest.

“’We Were Closer to Death Than to Life’: Death and Healing in Cabeza De Vaca’s La Relacion,” Society of Early Americanist conference, University of Tulsa, Tulsa, Oklahoma, March 2017.

“Saving Indians by Teaching Schoolgirls to Work: Quakers, the Carlisle Institute, and American Indian Assimilation,” Quakers, First Nations and American Indians from the 1650s to the 21st Century Conference, jointly sponsored by Bryn Mawr College, the Center for Native American and Indigenous Research at the American Philosophical Society, Haverford College, and the McNeil Center for Early American Studies, November 2016.

Invited Talk, “Fear and Awakening in the Captivity of Cabeza de Vaca,” Diocese of Southern Ohio Education for Ministry, November 2016.