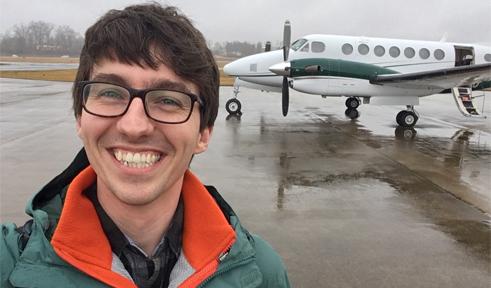 Institute of Nuclear and Particle Physics

Meisel’s primary research foci are the origin of the elements and the behavior of matter at extreme densities and low temperatures. He also investigates the structural evolution of nuclei, nuclear reactions for intermediate mass nuclides, and the development of nuclear instrumentation and analysis techniques. His primary research methods are low-energy nuclear physics experiments with stable and radioactive ion beams, coupled with astrophysics model calculations using open-source software.

I became interested in astrophysics in high school, through programs on the Science Channel and then reading on my own. Early in college I began an undergraduate research position in the field of nuclear astrophysics and became fascinated with the idea of studying stars in the lab.

The origin of the elements is one of the most fascinating open questions in nuclear physics research. Where we came from is a simple but fundamental question that we're only beginning to answer. Aside from satiating our own curiosity, many research topics in nuclear astrophysics benefit society in direct and indirect ways, such as helping us understand nuclear reactions that are critical for nuclear energy and medicine.

The Edwards Accelerator Lab at Ohio University is one of the small handful of places in the world where such research is possible. The on-campus accelerator and associated experimental equipment are vital tools in my research. On a personal note, I was born and raised in Ohio and am glad to be back in my home state after a decade-long hiatus!