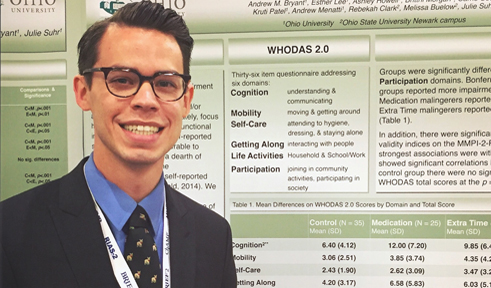 Mr. Bryant's current research interests include the use of near infrared spectroscopy (NIRS) to measure relative blood flow changes to the brain that result from orthostatic hypotension and its effect on cognitive performance. Previously, he investigated the effects of neurostimulation on memory and mood functioning in people with epilepsy. Overall, Mr. Bryant is interested in the application of neuropsychology and functional neuroimaging to study health related cognitive changes in the aging population.

Neuropsychological assessment of adult inpatients and outpatients drawn from departments of the medical center and outside referrals, including referrals for neuropathological conditions such as dementia, epilepsy, degenerative disorders, ADHD, and traumatic brain injury. Supervised experience in planning test selection, implementing, interpreting, and writing up, and results of neuropsychological evaluations using a broad range of tests and procedures.

The aim of this study to examine the effects of orthostatic hypotension, a rapid decrease in blood pressure upon standing or changes in body position, on cognitive abilities in the elderly using Near-Infrared Spectroscopy to measure relative blood flow changes to the prefrontal cortex. Administration of neuropsychological measures including the Repeatable Battery for the Assessment of Neuropsychological Status Update, Paced Auditory Serial Addition Task, Delis-Kaplan Executive Function System: Color-Word Interference subtest

Unravelling the Neural Contributions of Dynapenia in the Elders

Study is expanding on the nature of the relationship between dementia caregiver status and physical and psychological health outcomes as compared to a control group. Neuropsychological test administration (Repeatable Battery for the Assessment of Neuropsychological Status Update, Controlled Oral Word Association Test, Trails Making Test A and B) to caregivers and non- caregivers adults ages 50 years and older.

Emotion Regulation Strategies in Response to Ostracism: Effects on Mood and Eating Behavior in Individuals with and without Binge Eating

Administration of the semi-structured Abbreviated Eating Disorders Examination to assess for current and past binge eating episodes, compensatory and/or restrictive eating behaviors, and compulsive and/or compensatory exercise behaviors in undergraduate females ages 18-21.

A Study of Psychotherapy

Center for Research and Intervention in Schools Lab at Ohio University

Bryant A., Lee E., Mei Ng H., Suhr J. (October 2016). What Is Related to Complaints of ADHD Symptoms? The Forgotten Contribution of Sleep. Poster presentation at the National Academy of Neuropsychology. Seattle, WA.