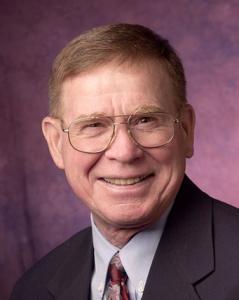 Charles “Doc” Higgins has been involved with education for sixty-four years. He has been leaving a legacy at Ohio University for forty-eight of those years.

Doc first came to Ohio after getting his Doctor of Education from UNC Greensboro. His first job at Ohio was teaching classes, but also starting up the Undergraduate Recreation Studies Major. His contributions at the University didn’t stop there. After five years, he was offered the opportunity to take over the Sports Administration program (which was starting to grow).

Sports Ad takes great pride in being a family — it’s one thing that sets the progarm apart from others — and Doc Higgins was the one who began that ideology as the head of the program. Doc is a large reason for the immense success and legacy that the Sports Administration program at Ohio receives.

Near the end of his career as the head of the program, Doc worked with students to start what is now known as the annual “Tobacco Road Trip.” Every January, the MSA class takes a bus to North Carolina and is hosted by many alumni of the program at various companies. Some of these include UNC, Duke, and NC State Athletics, Carolina Hurricanes, ACC Headquarters, Wasserman, and more. It’s a highlight of the MSA year and Doc and his wife Shirley have attended nearly every trip since the first in 1992.

Doc retired full time in 1994 but still currently works part time for the university teaching a seminar in Athletic Administration. He loves learning and teaching and says that there’s no better feeling than seeing your previous students succeed. You talk to any alumni, whether it’s the Class of 1972 or the Class of 2002, Doc is a fantastic professor, mentor, and colleague who loves what he does and who he does it for.