Information on the next O'Malley Cup Competition is forthcoming. 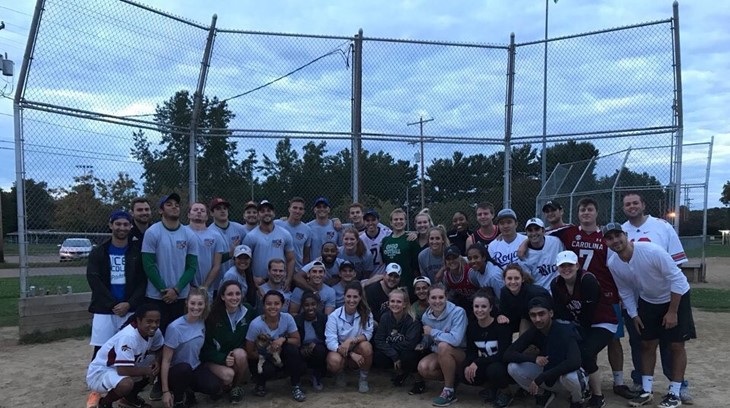 The O’Malley Cup was created by students from the Sport Administration Program as a way to honor Walter O’Malley and the competitive spirit that he embodied as the long-time owner of the Dodgers. As mentioned in his bio, Walter O’Malley is considered to be one of the founders of the Sport Administration Program at Ohio University, which is the first program of its kind. This is due to his revolutionary idea to develop a graduate-level program that would teach young men and women the business side of sports.

It was during the first few years of this change to the program’s structure that the two classes began to develop camaraderie, and meet on the playing fields to share their passion for sports. Inevitably, the friendly competition was further organized by the Class of 2004 as they developed a format for the series of events that would foster goodwill and encourage a friendly rivalry between the MBA students ("rookies" or "first years") and MSA students ("veterans" or "second years").

The result was the inaugural O'Malley Cup, which would be awarded annually to the class that finishes the academic year with the most combined points from specified categories within the Cup System.

Since the inaugural year, the O’Malley Cup has evolved into a head-to-head format in different sports, which has strengthened the aspect of friendly competition and rivalry between classes. The Cup System is now composed of 10 to 12 athletic events that are spread throughout the calendar year: flag football, miniature golf, soccer, corn hole, basketball, broomball, sports trivia, bowling, softball, and kickball. As a tiebreaker, each class develops and presents skits to the Sport Administration faculty at the MSA Thanksgiving dinner. The programs allegiance with the Ohio University Athletic Department has allowed for the flag football game to be played in Peden Stadium and the basketball game to be played in Convocation Center. This has intensified the match up and gives the students the opportunity to pretend they are college athletes for a few hours.

Although the O'Malley Cup is only entering its fifteenth year, it is the hope that even in its current format it will remain a long-standing tradition of the Sport Administration Program.