State of the Budget

Responding to our time, preparing for our future

State of the Budget

In a time of uncertainty and disruption, our call as a university remains to build a sustainable future for the students we serve, to be stewards of this remarkable and historic institution, and to help this and future generations grow in knowledge, wisdom, and lifelong learning.

To achieve these goals, we must respond swiftly to fiscal challenges that have been significantly amplified by the impact of the COVID-19 pandemic. And, we must do so in a way that does not diminish our academic quality or the student experience we deliver, but rather ensures that we continue to strengthen both.

This task will require collaboration, innovation and ongoing, purposeful commitment to our students and their success.

Though we were facing a challenging financial landscape before the global pandemic, OHIO is in a position to survive the financial challenges and uncertainty brought by COVID-19. We have the benefit of strong reserves, but we must act quickly and prudently to avoid depleting them. We must and we will make lasting, positive change.

Immediate Financial Impacts of the Pandemic

Since 2018, Ohio University has experienced a decrease in overall enrollments, which has had a significant impact on university revenues. A budget reduction plan was created to be phased in over five years with the use of strategic and operational reserves to ensure continued institutional strength while right-sizing the institution based on evolving enrollments. The Ohio University Board of Trustees committed to allowing the use of $65.8 million in reserve funding as changes were made. The university planned to use $26.2 million in fiscal year 2020. Now, the anticipated use of reserve funding for the fiscal year, ending June 30, is $51.6 million. Additionally, the nearly doubling of the use of reserves in just three months demonstrates the severity of the impact on the institution’s financial positions and the need for urgent action. Here's a look at what we know about our current fiscal year, ending June 30, 2020: 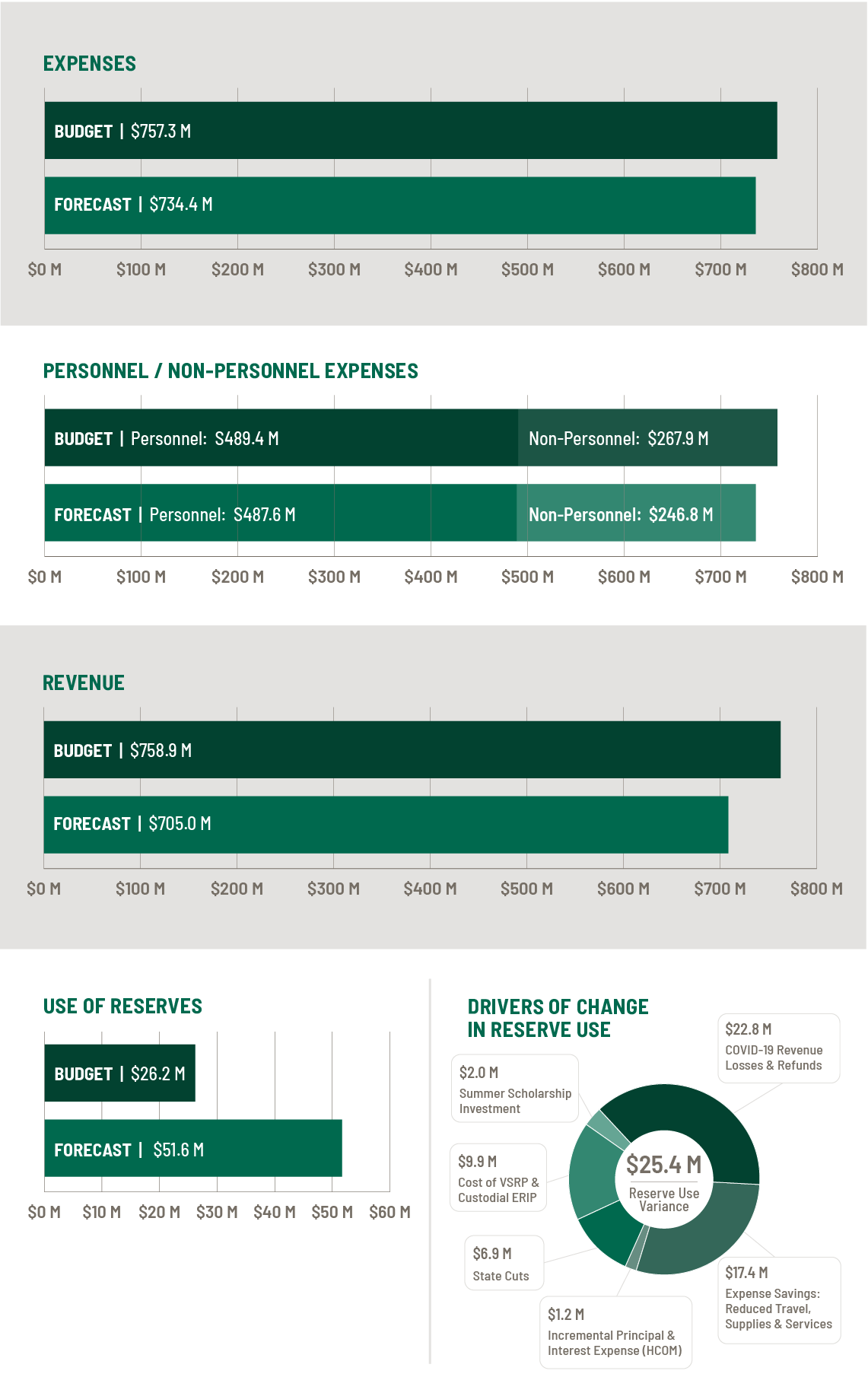 *All figures are subject to change

What We Don't Know Yet

Pandemic Impacts Moving Into FY21 and Beyond

While it is too early to predict with clarity how the pandemic may impact our fiscal year 2021 finances, we are certain those impacts will be significant. Governor DeWine has indicated that universities should expect to receive 15-20 percent less in state share of instruction funding in the coming fiscal years as all state agencies look to reduce their budgets.

National surveys indicate a potentially disruptive impact on enrollment. Our national unemployment is at a generational high, which may impact student’s ability to enroll or return. In addition, concern about the potential for courses to be online during a portion of the fall semester or anxiety about leaving one’s home community may impact decisions.

Ohio University is committed to doing all we can to support students financially, including increasing scholarships, holding tuition flat, and working with families to navigate changes in financial aid eligibility. In addition, we are actively planning toward Fall in order to be prepared to meet any restrictions around social distancing, testing and tracing, enhanced cleaning, or other precautions that may be recommended by the State of Ohio and Inter-University Council.

Ultimately though, we expect the combined impact of the SSI reduction and enrollment shifts to significantly increase our dependence on reserves.

Actions We Have Taken or Plan to Take

On May 1, we made our first significant staff reductions, impacting members of our AFSCME Bargaining Unit. 139 employees were notified that their positions would be eliminated effective May 31.

On May 15, 53 instructional faculty received a one-year notice of non-renewal. They will have an ongoing appointment for the upcoming academic year through May 15, 2021. In addition, we abolished 149 administrative positions as part of reductions and realignments. The University expects to rehire 55 administrators into new positions, for a net reduction of 94 positions.

On June 23, 81 employees were notified that their positions were eliminated. This personnel reduction included 63 classified positions, which was the only employee classification not impacted by earlier reductions, as well as 17 administrative positions, and one hourly position that is classified as non-bargaining unit/unclassified are impacted across the institution. This decision followed civil service reform measures, which were approved at the June 19 Board of Trustees meeting. The University expects to rehire 23 classified and administrative employees into new positions within the College of Arts and Sciences, for a net reduction of 58 positions.

The June 23 action was the last planned action of the FY20 fiscal year. In total, after rehiring, the University will have eliminated 344 filled positions across all campuses. This represents a total reduction of 7 percent.

These decisions were made based on a number of factors and should in no way minimize or erode the positive contributions that our colleagues who received notifications made to our university. Rather, a lack of available work, reduced demand for certain programs and services, and necessary restructuring to improve operational efficiencies led to the choices that were made.

We have also announced a University-wide furlough plan to be implemented in fiscal year 2021, which begins July 1, 2020, and applies to all administrative, faculty and classified non bargaining employees. Find more information on the FY21 Staff Furloughs webpage, including a listing of frequently asked questions. In addition, many Vice Presidents and Deans as well as our Athletic Director have committed to reductions of 10 percent or more, and our head football coach and head men’s basketball will take voluntary salary reductions of 10 percent.

What This Means for Bobcat Students – Our Continued Commitment 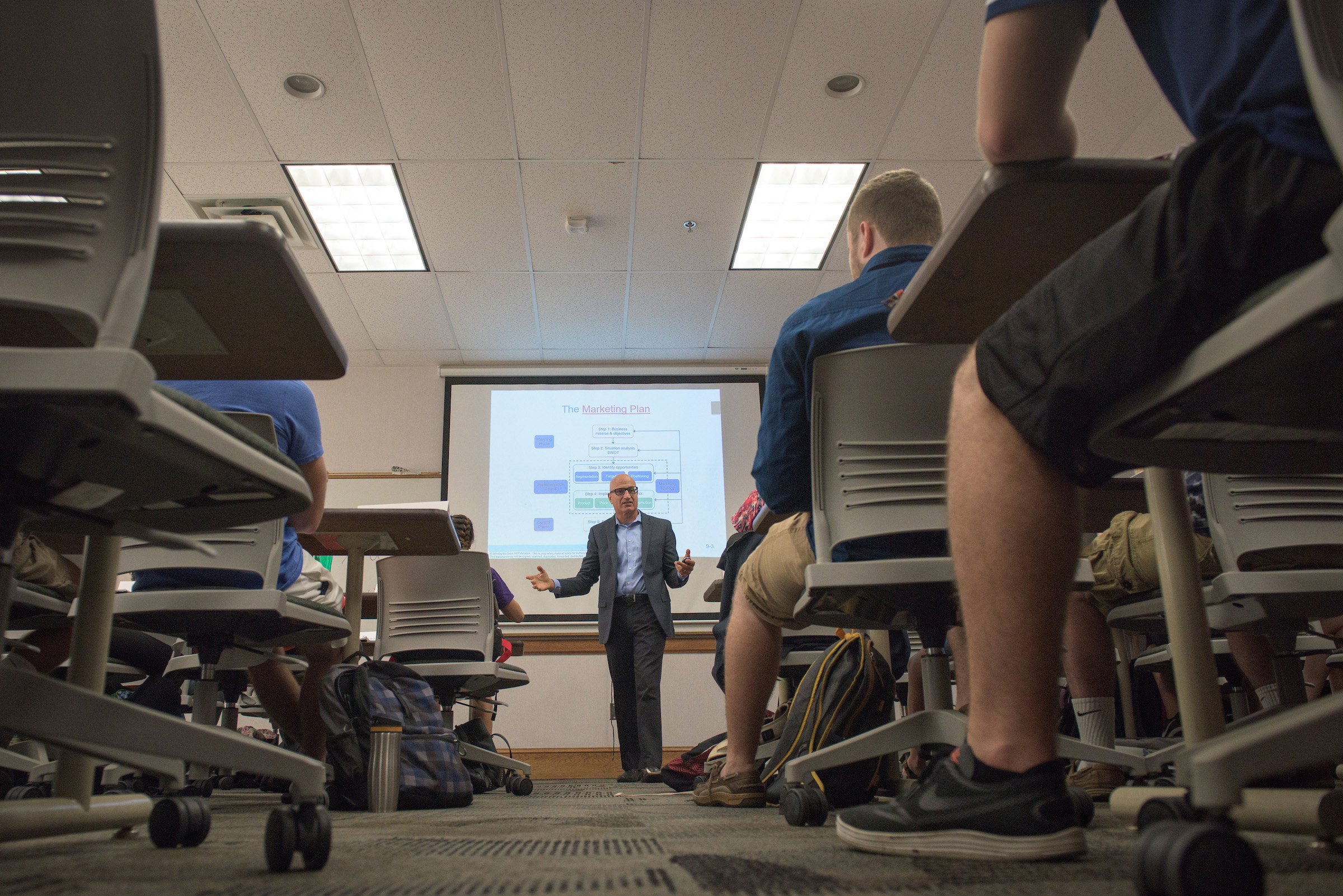 As we make necessary changes in response to financial challenges,  we can and we will protect the student experience, evolving in ways that are responsive to students’ interests and needs.

Next fiscal year, beginning July 1, 2020, a furlough will be instituted for all administrative, faculty and classified non bargaining employees. To minimize the impact on employees in our lower pay bands, an interim furlough policy was developed.

State of the Budget FAQ

The President and Provost have asked all Deans and Vice Presidents to review the work of their planning units and to identify work that we are doing that is critical to our success as an academic institution and to consider every option to conserve resources or generate revenue – both in the short term to help weather the pandemic, but also with an eye to where we want to be when the pandemic is over.

Working with unit leaders within their areas, planning unit heads developed recommendations for reductions. Leaders were instructed not to think in the context of hitting a pre-defined target or achieving across-the-board cuts, but rather to think strategically about meeting our financial challenges through strategic reductions while protecting our student experience. They were also asked to propose plans based on data. For example, changes in instructional capacity should be informed by credit hour production realities. Proposed plans have been shared with the President, Provost and Senior Vice President for Finance and Administration for review, revision and approval.

Decisions that are across the board or impact university policy, such as the development of a new interim furlough policy, are being vetted and revised through our shared governance structure.

During this critical time, our five senates, and numerous university committees are essential to our success. The fluidity and urgency of this situation demands that we review policies and, in some cases, develop new procedures to give us necessary flexibility. A good example of that is the development and review of an interim furlough policy, which was reviewed by President’s Cabinet and Budget Planning Council (BPC) before being finalized. BPC has also weighed in on administrative realignment plans that have university-wide reach.

Similarly, as we consider any changes to academic program offerings or academic college structures, we will engage with Faculty Senate and seek feedback through Student Senate leadership.

At the same time, departmental-level decisions, including personnel reduction decisions, will be made at the department level in consultation with the appropriate Dean or Vice President. Decisions impacting academic units will be reviewed by the Provost prior to implementation and decisions impacting administrative units will be reviewed by the President prior to implementation.

The majority of the institution’s operational costs are in its employees, and we must address the largest share of our budget while we simultaneously strategically plan for the future of our great University. As such, while the actions we we do not have plans for additional reductions in the coming weeks, we want to be transparent that we will continue to evaluate the ongoing impacts of the COVID-19 pandemic on our institutional revenue as well as our enrollment trends and make changes as necessary to protect the future of the institution.

While some impacts of the pandemic will be short term, others will carry with us for years. If we see enrollment impacts for fall, for example, those impacts will not only impact next fiscal year but the four subsequent years as that smaller class moves through the academic journey. In addition, Ohio University was already planning the use of reserves to bridge budget reductions over several years in response to changes in enrollment. If we make no changes to our expenses, our reserves simply will not be enough.

First, the President and Provost, along with all Vice Presidents and Deans, will be taking voluntary pay reductions. Second, as we explore furlough strategies, we are considering a tiered structure that would have greater impact on employees with higher salaries.
However, balancing our budget through a total restructuring of our compensation model that introduces a salary cap is not a viable option for several reasons:

Athletics was required to model budget reductions that reduce its institutional funding support. Athletics currently receives approximately $19.8 million annually in institutional support. Approximately $9 million is used for financial aid for student athletes. If the other $10.8 million was cut in its entirety, it would contribute only in a small way toward our financial challenges, as it represents only 1.4% of our total University budget. It would, however, have dramatic impact on our student and alumni experience – impact that would change who we are as an institution and have unseen ripple effects on institutional revenues.

Can we make cuts in athletics, yes. And we will do so. We are not, however, considering a 100% cut or the elimination of sports at this time.

Donors typically designate private donations to the University for a targeted purpose, be it a facility, a particular school or college, or a specific chair or program. Those funds, while extremely important to our educational mission, cannot be used to supplement the University’s operating budget.

Gifts to the university are vital to our funding structure and are used to leverage other revenue sources. But gift funds in no way lessen the importance of maintaining a strong financial base of support from the state, from tuition, and from research dollars.

A furlough was instituted for fiscal year 2021, which begins on July 1, 2020. This measure will be applied to all administrative, faculty and classified non bargaining employees. To minimize the impact on employees in our lower pay bands, an interim furlough policy was developed. See the FY21 Furlough website, including a listing of frequently asked questions.

We are committed to transparency with our University community regarding our financial challenges and how we are responding to them. We also invite your constructive solutions and ideas. We will continue to update our FAQ both with new information on this developing situation and answers to your specific questions.